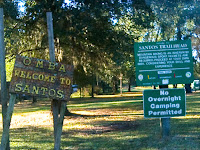 Got a chance to ride around the Santos Trail System. It's been over 3 years since I've been there and the folks and the OMBA have been pretty busy.


Since I was there last they got some stuff done :
Completed MANY miles of trails
Totally reworked the Vortex section with the cooperation of IMBA
Recived the Epic designation by IMBA - The first time IMBA gave that designation to an ENTIRE trail system. 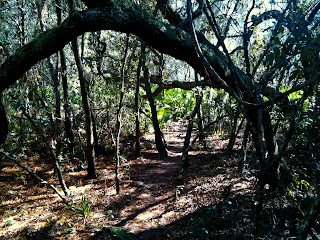 Started the day by riding the 42 mile Epic trail route. Sweet fast big ring single track. From flowing high speed slalom to tight blind turns. Mostly easy, non tech stuff but great to get fast off-road miles in.
The last section "Shangri-la" with the Nayls trails is about 11 miles long, much more interesting and gives you a reason to get off of the big ring.
It's nice to be able to ride 42 miles ALL on single track! Woot! Well - there's actually about 3 miles of multi-use trail on an old forest road through the Christmas section on the way back in.
Along the way I took a few excursions to do the the Twister and Canal Digging trails. All in all the day netted 55+ single track miles and an ear-to-ear perma-grin. 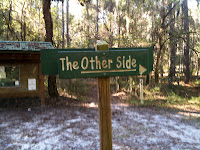 No trip to Santos is complete without going to "the Other Side" aka the Vortex. I love that sign. More Free-Ride, DJ and big drop stuff than you can possibly describe. Pump tracks galore. Progressive drops and lines to build skills. Pretty cool that this stuff could be built and maintained on state owned property. 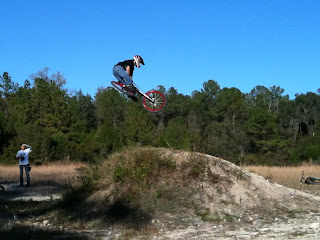 The Vortex also has some really nice techy trails all around and through it. Much of it is used for the 12 hrs of Santos in February.
My pocket camera was out of service so all the photos are with the trusty iPhone, so sry for the quality. 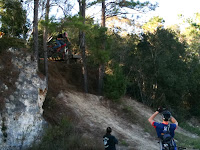 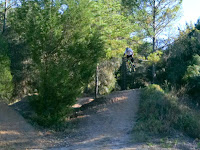 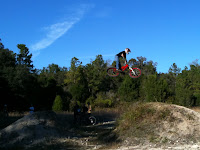 Cleaned 2-3 years of dust off an old steed and took it for an early morning TurkeyDay ride.

Looked for some Thanksgiving dinner on the way and came up with a few prospects : 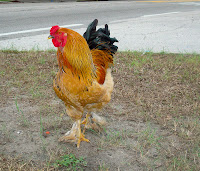 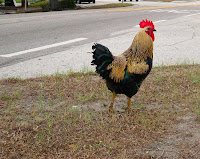 But I didn't have the heart to put 'em on the table, so they got the presidential pardon. 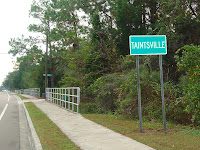 Went to check out some Florida single track at the BigLittle Econ State Park. 8-9 miles on the road to get to the trails. Wasn't too bad especially since you got to pass through the Ville of the Taint.
Seems like they should be soliciting DZ to have his product made and shipped from here. It would be a match made in heaven if ya ask me. 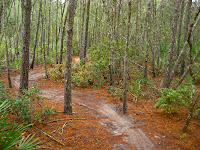 on this fine old steed 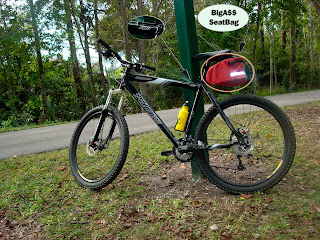 Can't decide what makes this bike so sexy and fast. Gotta be either the "Pro" decal or the sweet sexy seat bag.

Hope everyone had a great TurkeyDay and got a chance to get your
RideOn
JB
# posted by JB @ 7:27 PM 0 comments

Man of Many Talents

La Ruta de los Conquistadores wrapped up yesterday. Many, many stories and much drama from this self described "World's Toughest Mountain Bike Race".


The FAST JB exercised his body and exorcised some demons down there. He successfully finished the stage that almost killed him a few years back, and kissed the ground when he was done. If it wasn't for a few mechanicals and some wrong turns, he might of been the 1st American to ever win it.


Forever young Tinker had similar navigational problems that led to a DQ for not following the course. He got back on his magic carpet and finished the last 2 stages "off the record". He was first over the top on the toughest climb on day three.


Manny Prado, a Costa Rico native won the race, fulfilling a dream he had 6 years ago when he first entered.

The second stage featured a new climb that was an hour long at a pitch of %30. When Jeremiah says its "The toughest, steepest thing I've ever ridden", you know it's for real.

Check CyclingDirt for some awesome coverage and many, many, great interviews.


Perhaps the most compelling story was of Ben Bostrom. "BBoz" is no stranger to going fast on 2 wheels. 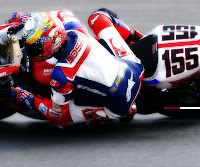 His motorcycle palmares include multiple AMA Championships, Superbike and Sportbike wins around the world, and even an X-Game gold medal! photo credit AlpineStars.com

This was his FIRST mountain bike race. WHAT! That's right his first mountain bike race - and he's out there mixin' it up with the best in the world. He only rides 4 months a year - when he's not racing his moto.

He won the Masters A 30-39 division with a total time that would've been good enough for a 5th in the Open division. Next year he's actually going to train for the event - WATCHOUT!.
Check this video of some BBoz craziness at LagunaSeca.


The post race interview is great. On the final pavement section of the last stage he gets his first real experience in a "pro" paceline, and learns all about the chicken wing.

Speaking of men of many talents - Metro's post that had Christopher Walken performing Lady Gaga's Pokerface reminded me of this old Fatboy Slim video :

This Is a Test

and should probably be administered to everyone before they get a driver's license.

Went for a ride yesterday anyway. Steady 50 mph winds, gusts over 70. Learned a few things :
- It is possible (though not advisable) to ride through water that is up to your top tube.
- You can't hop logs when they are floating on top of the water.
.. 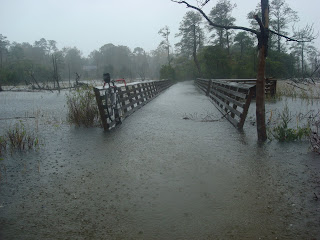 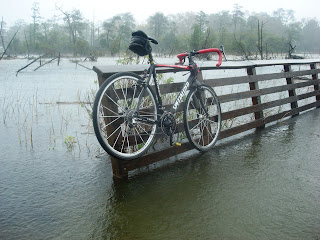 The bridge itself is "only" covered by 18"of water. This was at LOW tide.
The"experts" from the Weather Channel have been down at the ocean front talking about beach erosion for the last 2 days. They've really missed the story.
Entire nieghborhoods are under water.
The Lesner bridge over Lynnhaven inlet has been closed for over 12 hours. There's 4+ feet of water in the road on the west side.
. 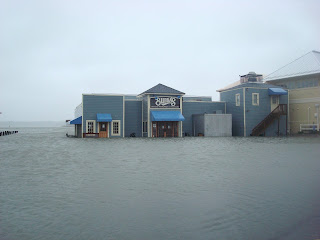 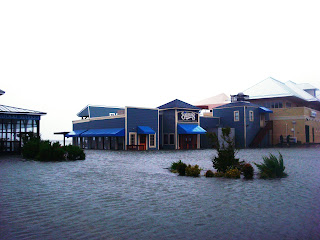 Prolonged Event seems to be the buzzword today. 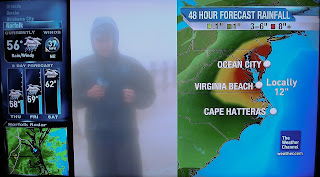 When the Weather Channel crew shows up in town you gotta figure it might be serious. Seems like all the focus is on the Ocean front. The inland waterways are what REALLY get the max effect of these nor'easters.

Hmmmm, may rethink that. 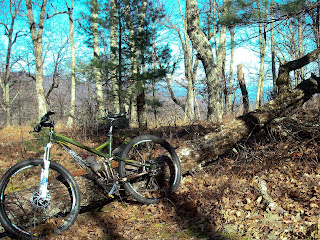 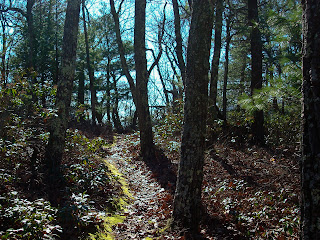 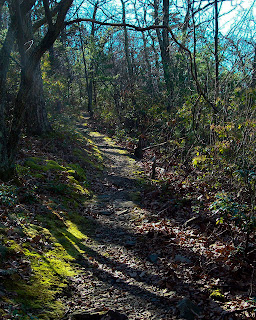 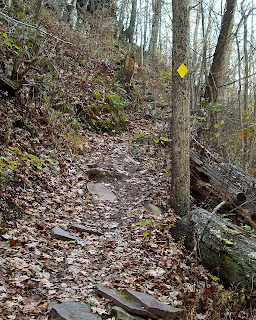 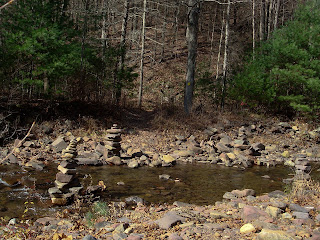 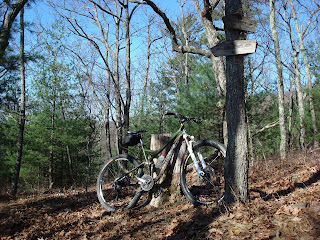 It seems you can't go riding on the road more than a week or so without encountering one or more automobile drivers that are venting their rage against cyclists. It seems this rage goes through levels.

Rage level 1 - An uncalled for string of beeps on the horn. More than is neccessary to just let us know they're there.

Rage level 2 - Window is rolled down - Obnoxious expletive laden yells - telling us to get off the road, or we don't belong there , or whatever.

Rage lvl 4 - Attempts at physical harm - by swerving the car, or throwing things out the window. (Warning to anyone who might try this - Don't throw things at cyclists on a large group ride when on a road with traffic lights, especially within sprinting range of KJ - You will pay the price)
Rage lvl 5 - This is serious, and justice was served this week in a case in California :

Velonews has nice coverage of the court case.

He was found guilty of six felony counts. After the verdict he was DENIED bail.

No one is the winner here. But lets hope this sends a message to everyone.

Go ahead and hit play before reading

Friday at the shiny coin : 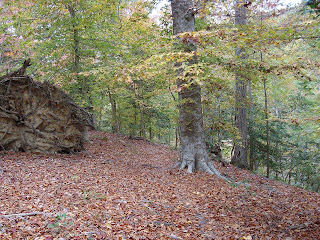 Leaves are fallin all around....


There was a trail here somewhere
Which way did it go? 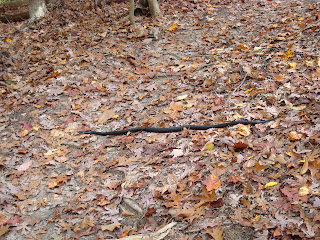 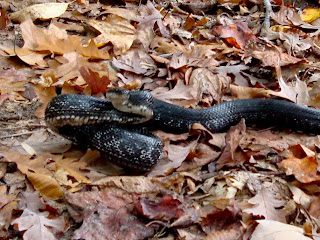 So I helped him off the trail with a handy snake stick. 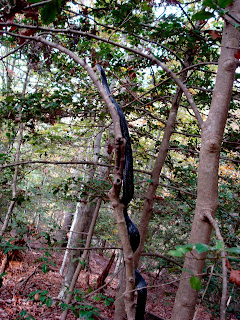 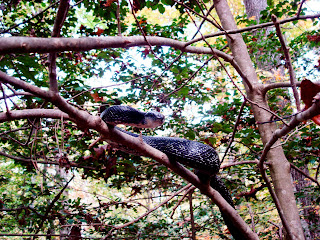 or maybe a drop in? 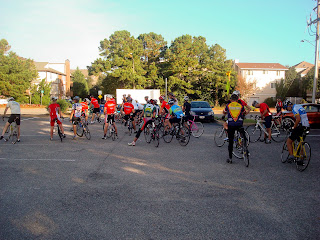 Saturday's group ride might of been the worst I've felt on the bike in a while. Got up on time, fell back asleep (sometimes I grow so tired). Time trialed down to the start, was late. Tried to chase down VBBlvd. Found Young Bill, Smoothie Chuck, et al, behind Pembroke.
Chuck dropped me ...... while on the small ring!!! Aquiring a real taste for humble pie.
Felt better for loop 2, the day was beautiful.
Sunday the weather changed ...... I smelled the rain, and with it pain, and it was headed my way ....in the form of a ride through the park .....